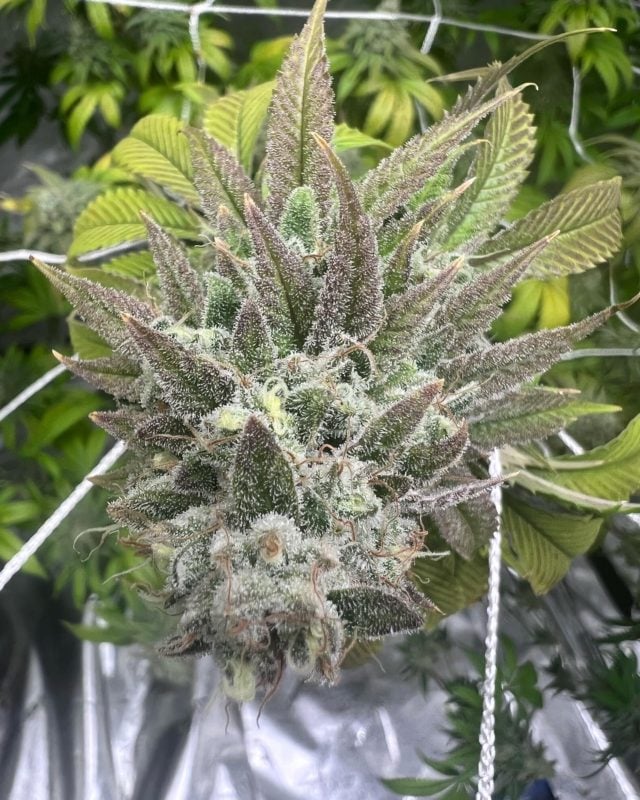 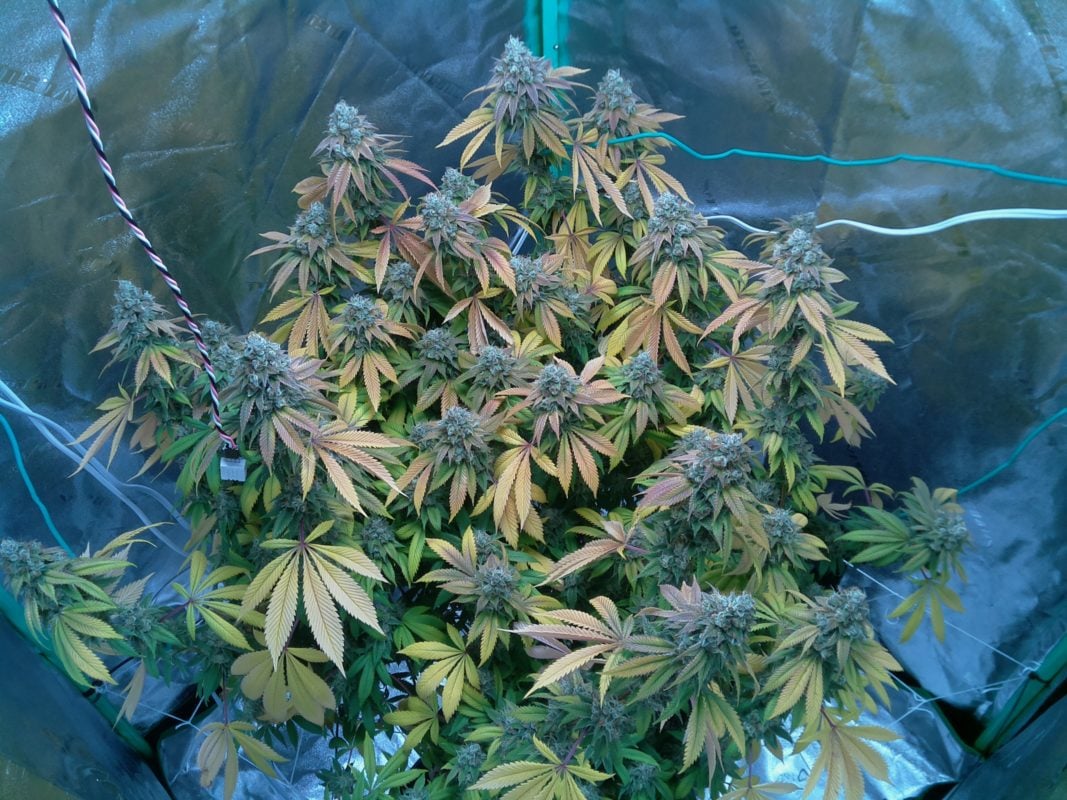 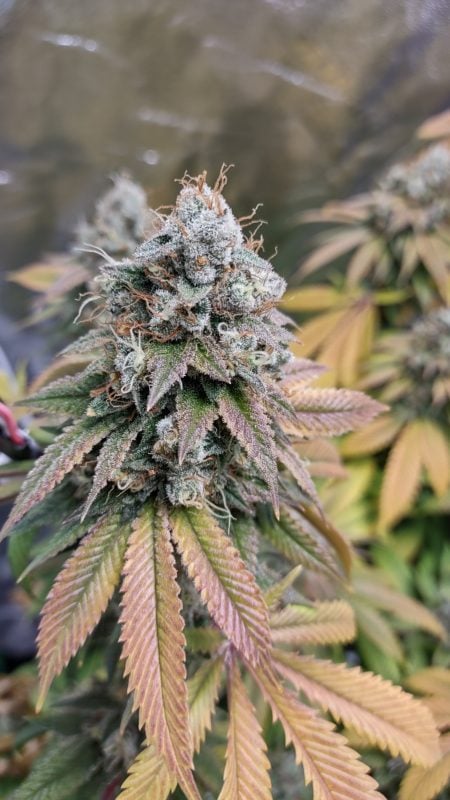 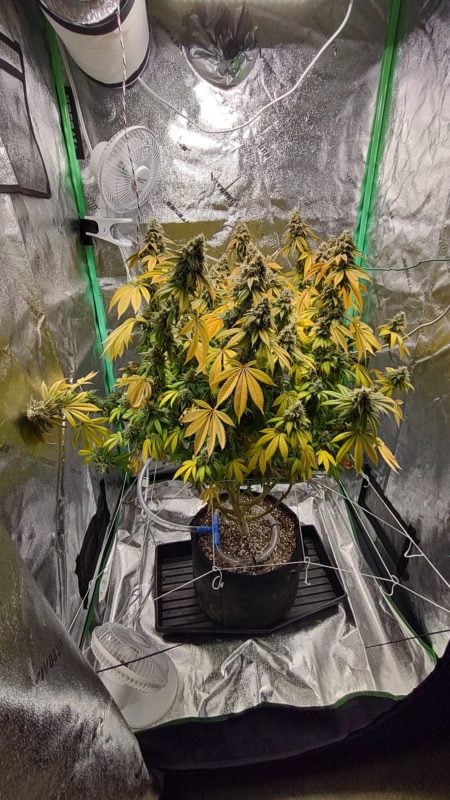 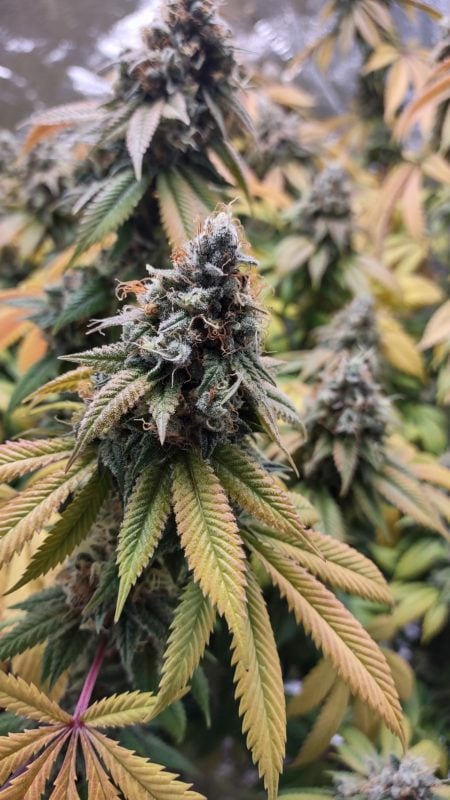 This was overall a very easy grow. The buds are very frosty and the taste is absolutely delicious. Very strong smell and tasty smoke. The smoke delivers a very good head high almost instantly and a body high sets in later. I will be growing this again for sure!

Headband is a timeless cannabis cultivar that has been a staple among growers and users since the early 2000s. This strain covers all the bases, offering a bountiful yield of dense, frosty buds that are rich in terpenes and cannabinoids. Purple Punch, in turn, is known for its glamorous color, sweet, fruity aroma, and soothing effects. By combining these two celebrated strains, Greenpoint Seeds has created Head Punch—a top-shelf hybrid that combines the best characteristics of Headband and Purple Punch.

Headband, the mother of Head Punch, is a widely popular strain that has been a staple among medical and recreational users for many years. Although Headband is a renowned strain, its origins are shrouded in mystery.

Headband is said to have originated in New York during the mid-1990s. This variety, originally known as Diesel No. 1, was purportedly created by a grower by the name of Weasel. This grower had acquired clones of Chem ’91, Massachusetts Super Skunk, and Northern Lights, and set out to create a hybrid of these legendary strains. First, Weasel used the Northern Lights from Sensi Seeds to pollinate his cut of Super Skunk. He then used this Super Skunk-Northern Lights hybrid to pollinate Chemdog’s famous cut of Chem ’91. He dubbed the resulting hybrid Diesel No.1, likely due to its pungent aroma of diesel fuel.

Sometime later, Diesel No. 1 made its way to the West Coast, where growers and users began referring to the cut as Headband. This name is said to have arisen from the strain’s intense cerebral high. Soon, many cuts of Headband started to appear, and some of these cuts were said to be hybrids of East Coast Sour Diesel and OG Kush.

One breeder, known as Loompa, acquired a clone that was labeled “Headband.” Unlike other Headband phenotypes, this variety appeared to be heavily OG Kush-dominant. Loompa’s Headband soon became widely popular due to its potent high and pungent aroma of pine, lemon, and gasoline.

Today, Loompa’s Headband is one of the most coveted cuts of Headband, and has been used to make many hybrids that are potent, frosty, and flavorful.

Purple Punch is one of the most popular cannabis cultivars to hit the market in recent years. This coveted, clone-only variety offers a bountiful yield of dense, purple buds that are syrupy sweet. Purple Punch is believed to have been bred in the early 2010s by a group of Hawaiian growers known as Supernova Gardens. To create this strain, Supernova used a stellar male phenotype of Granddaddy Purple to pollinate the classic Larry OG cut. They dubbed this strain Purple Punch in light of its exotic coloration and knockout high. Today, Purple Punch is a favorite among medical and recreational users, who can’t get enough of its sweet, fruity flavor.

Purple Punch is an Indica-dominant cross of two celebrated strains— Larry OG and Granddaddy Purple. Larry OG, the mother of Purple Punch, is a descendant of the classic OG Kush variety. Some growers have suggested that Larry OG is an original cut of OG Kush; however, it tends to produce a larger yield and thicker branches than most OG Kush phenotypes. In light of this, many growers believe Larry OG might be an S1 or hybrid of the original OG Kush.

Loompa’s Headband, the mother of Head Punch, is celebrated for its complex and powerful aroma. This cultivar smells of lemon peel, pine, damp soil, skunk, and diesel fuel. Headband’s classic aroma is similar to that of OG Kush.

Purple Punch, the other parent of Head Punch, emits a unique, mouthwatering aroma that is sweet and fruity. Purple Punch fills the room with a delectable bouquet of grape, blueberry, and candy, with hints of vanilla and herbs.

Head Punch combines the robust aromas of both parental lines. This variety smells of lemon, petrol, skunk, and pine, with sweet undertones of grape soda and blueberry candy. Depending on the phenotype, Head Punch may be more sour and skunky, or sweeter and fruitier.

Head Punch combines the skunky, earthy flavor of Loompa’s Headband with the sugary sweet taste of Purple Punch. This strain offers a lip-smacking flavor of lemon, grape, berry, and vanilla, with funky notes of skunk, pine, and gasoline. The smoke is smooth coats the palate with a delightful aftertaste that lingers on the tongue long after smoking Head Punch.

Headband is a potent variety that produces copious amounts of THC. This strain offers a balanced effect that can be felt in both the head and body. The high beings with a powerful cerebral experience, that may leave users feeling motivated and inspired. Some consumers report feeling a light pressure around the head, as if they had donned a headband. Soon, the intense cerebral high shifts into a calming stone that may relax the body and ease pain. When smoked in moderation, Headband can be enjoyed at any time of day.

In contrast, Purple Punch is capable of producing between 18 percent and 20 percent THC, and delivers a hard-hitting stone. Soon after smoking Purple Punch, users report experiencing a mellow head high that may ease stress and boost the mood. This soothing cerebral rush is followed by a relaxing and body-numbing stone that may reduce pain and general discomfort. Purple Punch is an excellent choice for an afternoon smoke, or a delicious nightcap.

Loompa’s Headband is medium to tall in height, with long, thin branches that have substantial internodal spacing. This variety forms medium-size colas, with tight clusters of dense buds. The lime-green flowers are adorned with red-orange pistils, swollen calyxes, and a heavy dusting of milky trichomes.

Purple Punch is of medium height, with emerald-green leaves and thick branches. This cultivar forms large, weighty colas that are caked in a thick blanket of resin. The flowers are fluffy but dense, and sport bright-orange pistils and purple sugar leaves. Purple Punch often displays exotic hues of violet toward the end of the flowering cycle.

Head Punch in medium to tall in height, with robust branches and fat, dark-green leaves. Some Headband-dominant phenotypes may be taller, with greater internodal spacing. Head Punch forms medium-size colas that comprise dense clusters of buds. The flowers are rock-hard and are decorated with fiery pistils and thick, milky resin glands. Some Purple Punch-dominant phenotypes may display shades of purple in the leaves and flowers when exposed to cold temperatures.

Headband is a moderately easy strain to grow, and is resistant to most pests and diseases. This cultivar can thrive both indoors and outdoors, and tends to prefer a warm and dry climate. When provided with ample lighting and a diet rich in micronutrients, Headband can produce a bountiful yield of grade-A buds.

In contrast, Purple Punch is a hardy and easy-to-grow variety. Purple Punch is resistant to pests and diseases, and can quickly recover from most environmental stressors. This cultivar can be grown both indoors and outdoors, and thrives in a warm climate, with moderate humidity.

Head Punch is moderately easy to grow, and is resistant to pests, diseases, and environmental stressors. This cultivar can be grown indoors and outdoors, using an array of cultivation techniques. When grown outdoors, Head Punch thrives in a temperate climate, with low humidity.

Headband is known to require an ample supply of calcium and magnesium. Like its mother, some phenotypes of Head Punch may also require an abundance of micronutrients. Growers can prevent deficiencies by feeding the plants with a cal-mag supplement, or using dry amendments such as dolomite lime, crushed oyster shells, or Epsom salt.

Given the density of the buds, some Head Punch plants may be susceptible to botrytis, also known as bud rot. Growers can avoid bud rot by keeping the humidity level below 50 percent during the flowering period, removing excess fan leaves, and providing ample lighting and ventilation.

Some Headband-dominant phenotypes of Head Punch may stretch substantially during the flowering period. Growers can control the height and boost the yield of the plants by using a variety of high- and low-stress training methods. Head Punch responds well to topping, fimming, supercropping, and other training methods.

Growers can prevent infestations of fungus gnats, mites, and other pests by maintaining a sterilized growing environment, providing sufficient airflow, and letting the plants dry out between feedings.

Head Punch reaches maturity quickly, and most plants will be ready for harvest within nine weeks; however, some plants may take up to ten weeks to fully ripen. It is essential that growers harvest the plants at peak ripeness to maximize yield and potency. To determine if the plants are ripe, growers often examine the trichomes on the buds with a jeweler’s loupe. When the resin glands have turned from transparent to milky white, the plants are fully mature and are ready to be harvested.

To harvest the plants, growers cut down the branches and remove the fan leaves. Next, they use trimming shears to remove the small sugar leaves around the buds. These sugar leaves can be used to make extracts, tinctures, and other THC-rich products. After manicuring the buds, growers typically hang the branches up to dry for three to six days.

After thoroughly drying the buds, growers remove the flowers from the branches and store them in sealable glass jars to cure them. This is an essential step to enhance the aroma, flavor, and potency of the buds. They open the jars once or twice for up to two weeks to prevent moisture from accumulating in the jars. After two to three weeks, the buds can be smoked; however, fully curing the buds may take up to eight weeks.

Head Punch is a powerful feminized hybrid that rocks users with its potent effects. This strain brings together Loompa’s Headband and Purple Punch—two elite varieties that are celebrated among growers, breeders, and users. Head Punch offers the classic aroma and balanced effects of Headband, and the scrumptious flavor and vigorous growth of Purple Punch. This variety is sure to produce many top-tier phenotypes that cannabis connoisseurs will treasure.

Contact Greenpoint Seeds for more information about Head Punch. While you are here, check out our wide selection of top-tier cannabis seeds.