Western Grail is the Holy Grail of cannabis strains. If you have been searching for a cultivar that delivers high yields and exceptional concentrates, look no further than Western Grail. This hybrid of Larry OG and Stardawg produces incredibly potent and aromatic flowers that will satisfy any connoisseur.

Western Grail is the Holy Grail of cannabis strains. If you have been searching for a cultivar that delivers high yields and exceptional concentrates, look no further than Western Grail. This hybrid of Larry OG and Stardawg produces incredibly potent and aromatic flowers that will satisfy any connoisseur. Both parents in this cross contribute significantly to the various phenotypes. If you enjoy the skunky aroma of Chem 4 and the gassy qualities of OG Kush, Western Grail is precisely what you have been looking for.

Larry OG, the mother of Western Grail, descends from the timeless OG Kush, one of the most prominent cannabis cultivars across the globe. OG Kush’s story started in 1992, when Alec Anderson, a grower in southern Florida, purchased an ounce of a variety called “Krippy.” Alec was thrilled to discover some seeds in the Krippy flowers, and he decided to sprout them.

One of the plants was particularly intoxicating, so Alec decided to clone it. He gave one of the clones to a fellow grower, Matt “Bubba” Berger, for safekeeping. One of Matt’s friends stated that the buds of this plant resembled “kushberries,” and the growers started referring to the strain as “Kush.”

In 1996, Matt decided to join California’s burgeoning medical cannabis industry. He brought a clone of Kush to Silverlake, California, where he and his friend, Josh D., began a cannabis-growing operation. The Kush soon became popular in the area, and the two growers hastily expanded operations to accommodate the demand. Soon, several other growers started distributing fake clones of Kush, so Matt and Josh began referring to their phenotype as “OG Kush” to classify it as the original Kush variety.

During the early 2000s, several OG Kush phenotypes started to emerge in Southern California. One grower, known as Wick650, acquired a powerful and high-yielding phenotype known as Larry OG. Wick650 claimed that he received this cut, and another known as Hell’s Angels OG, from some bikers in Orange County, California. Wick650 gave cuts of Larry OG to several of his friends, and soon many people in Southern California were cultivating it.

Sometime later, a breeder known by the name of Swerve obtained a cutting of the Larry OG. He popularized this phenotype by distributing crosses of Larry OG via his popular seed company, The Cali Connection. Soon, growers and users across the globe were trying to find a cut of Larry OG. In 2012, Larry OG earned the title of 1st Place Hybrid at the High Times Bay Area Medical Cannabis Cup, further reinforcing its reputation as an elite OG Kush cut. Since, Larry OG has won numerous awards, and several breeders have used this phenotype to create potent and frosty OG Kush hybrids.

Some growers suggest that Larry OG, the mother of Western Grail, is a cutting of the original OG Kush phenotype; however, it displays some differences from the original cut. Particularly, Larry OG typically produces a greater yield and stronger branches than most OG phenotypes. Given these differences, many think that Larry OG is an S1 or a hybrid of OG Kush and another strain. Larry OG reportedly originated from a group of bikers in Southern California in the early 2000s.

The ancestry of OG Kush is undetermined. Given the cultivar’s citrusy fragrance and Kush-like structure, many growers have suggested that OG Kush could be a cross of Lemon Thai and Pakistani Kush. Others think that it might be the offspring of Chemdawg, given its skunky, earthy flavor.

Stardawg, the father of Western Grail, was released onto the market in 2011 by Top Dawg Seeds. JJ NYC, the founder of Top Dawg Seeds, created Stardawg intending to preserve Chemdawg’s prize-winning traits.

J.J. bred Stardawg by pollinating the authentic cut of Chem D with an Afghan No. 1 male from Sensi Seeds. He then backcrossed this hybrid with Chem D twice in order to stabilize its phenotypical expressions. Finally, he used this backcrossed strain, which he named “Tres Dawg,” to pollinate his cut of Chem 4, boosting Tres Dawg’s vigor and yield. J.J. called his new variety “Stardawg,” possibly to emphasize its copious trichomes that as white as stars.

JJ NYC states that Stardawg is a hybrid of Chem 4 and Tres Dawg. Tres Dawg, Stardawg’s father, is a backcrossed strain that descends from Chem D and Afghan No. 1. Chem 4 and Chem D are progenies of Chemdawg—a distinguished cultivar with an unknown pedigree. Given its skunky scent, some believe that Chem D could be a phenotype of Skunk No. 1. Others suggest that it could be a cross of Lemon Thai and Pakistani Kush.

The breeders at Greenpoint Seeds used their tried-and-true Stardawg male to pollinate the original Larry OG cut. The resulting hybrid—Western Grail—produces many phenotypes that exhibit the elite qualities of both parental lines. This strain brings together the yield, vigor, and funky aroma of Stardawg with the extraordinary potency, flavor, and bud structure of Larry OG.

Larry OG emits a rich fragrance that is both sweet and earthy. This variety smells strongly of pine, soil, fuel, and ripe lemons. When the flowers are broken apart, subtle notes of orange also become evident.

Stardawg offers a powerful bouquet with biting notes of skunk, gasoline, rotting meat, pine, and damp soil. Undertones of mint and citrus also become noticeable when grinding up the flowers.

Western Grail mixes Larry OG’s classic Kush-like fragrance with the funky bouquet of Stardawg, creating a complex aroma that lingers in the air. This variety smells of pine, lemon, and soil, with acrid hints of skunk and diesel fuel.

Western Grail offers a luscious flavor that continues to tantalize the taste buds long after the smoke has cleared. This variety brings forth the classic OG Kush taste of pine, lemon, and gasoline, and melds it with Stardawg’s skunky, funky flavor. Depending on the phenotype, some plants may taste more of petrol and lemon, and others may be skunkier.

Larry OG delivers a powerful but balanced effect. Users report that this strain offers an intense cerebral high that may improve the mood and relieve stress. This exhilarating mental high is coupled with a soothing, body-melting stone that may alleviate pain, reduce muscle tension, and boost the appetite. Larry OG offers a joyful and relaxing effect that is potent but not overpowering.

Stardawg is a mostly-Sativa cultivar that offers an energizing high. Stardawg may boost mental clarity and leave users feeling cheerful and motivated. Users report that this strain may also help ease discomfort, fatigue, and tension in the muscles. Given its blissful and revitalizing effects, this strain is popular among medical and recreational users alike.

Western Grail combines the relaxing and body-numbing stone of Larry OG with the energizing cerebral high of Stardawg, delivering a well-balanced effect that awakens the mind and soothes the body. Larry OG-dominant phenotypes may be more calming and narcotic, and Stardawg-leaning phenotypes may offer a more stimulating high. Most plants will offer a mix of these effects.

One of Larry OG’s distinguishing characteristics is its sturdy structure. This variety typically produces a bigger yield and stronger branches than most OG Kush cuts. Larry OG is medium to tall in height, with thick stalks and large, dark-green fan leaves. This strain forms giant colas that are liberally sprinkled with trichomes. Larry OG produces round, hard buds decorated with bright-green calyxes, forest-green sugar leaves, auburn pistils, and white trichomes.

Stardawg is of average height, with thick branches, compact internodal spacing, and dark-green leaves. This variety develops hefty, perfectly-formed colas that are covered with a heavy dusting of resin glands. Stardawg produces large, lime-green flowers with red-orange pistils and dark-green sugar leaves. Most Stardawg plants remain green throughout the flowering cycle; however, some uncommon phenotypes may present shades of violet when exposed to cold temperatures.

Western Grail is somewhat shorter than Larry OG, with thicker branches and more lateral growth. This strain produces big, hulking colas that are heavily caked in trichomes. The flowers are dense and frosty, with lime-green calyxes and neon-orange pistils.

Larry OG is a fairly simple cultivar to grow and is resistant to most pests, diseases, and stressors. This strain can be cultivated both indoors and outdoors, using an array of cultivation methods. When grown outdoors, Larry OG performs best in a dry climate with moderate temperatures. Larry OG requires a nutrient-rich diet to reach its full potential and flourishes when provided additional calcium and magnesium.

Stardawg is easy to cultivate and can resist most pests, diseases, and environmental stressors. This strain can be grown indoors and outdoors in a wide range of environments and cultivation techniques. When grown outdoors, Stardawg tends to perform best in a temperate climate with low levels of humidity.

Western Grail is easier to grow than Larry OG and can endure most environmental stressors. This strain grows quickly during the vegetative period and can complete the flowering cycle in nine weeks. When provided with proper nutrition, abundant lighting, and a consistent day/night cycle, this strain reliably produces large yields of top-shelf flowers.

Due to its OG Kush heritage, some Western Grail phenotypes may be susceptible to powdery mildew infections. Growers can prevent the growth of powdery mildew by maintaining the appropriate temperature and humidity in the grow room, offering plenty of lighting and airflow, pruning excess leaves, and using foliar sprays such as water and apple cider vinegar solutions.

Contact Greenpoint Seeds for more information about Western Grail. While you are here, check out our wide selection of regular and feminized seeds.

Have you grown or smoked Western Grail? Tell us about your experience in the comment section below. 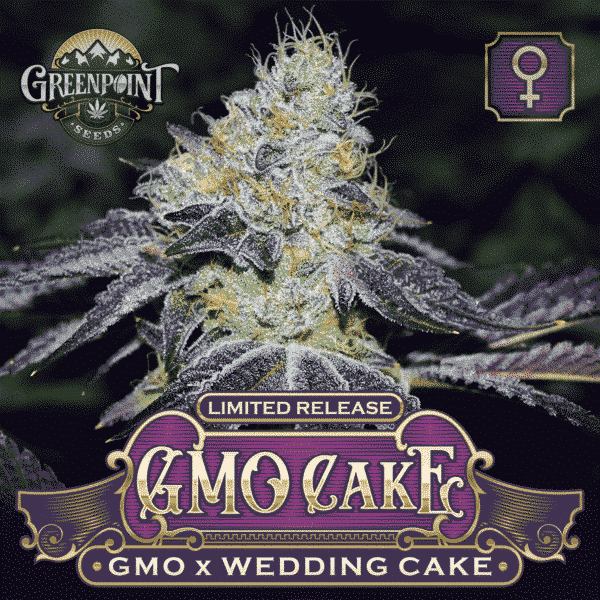 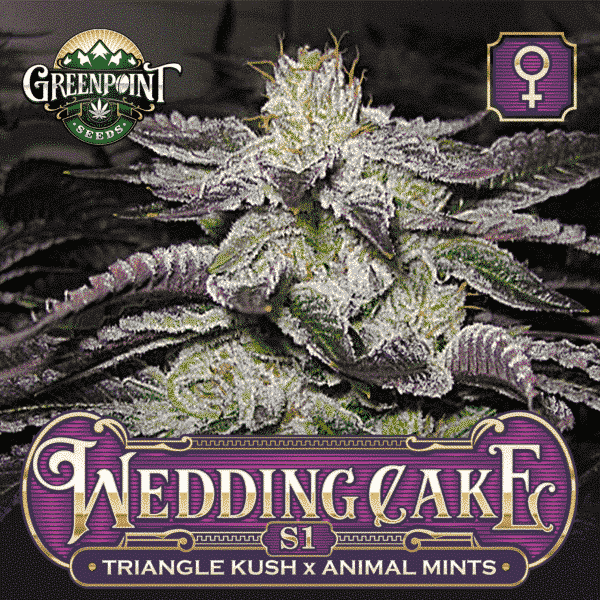