The Golden Goat strain is a classic cannabis cultivar from the Midwest that has been mesmerizing marijuana growers and smokers for many years. This hybrid of Island Sweet Skunk and Hawaiian Romulan offers uplifting cerebral effects and a luscious tropical-fruit flavor. Its abundant yield and relatively quick flowering time make Golden Goat popular among commercial growers. This legendary strain is one of the finest Sativas to come from the United States.

Golden Goat was originally created by Mr. Dank—a cannabis grower based in Topeka, Kansas. One of Mr. Dank’s Hawaiian Romulan plants turned out to be a male and, before the grower could separate it from the other plants, it pollinated an Island Sweet Skunk female.

From this unplanned pairing, Golden Goat was born. According to cannabis legend, Mr. Dank reportedly named the strain after the syrupy-sweet soda bottles found around the Golden Goat recycling machines in the area.

After its appearance in the early 2010s, Golden Goat became extremely popular in Kansas and its neighboring state, Colorado. Soon, it made its way to the rest of the country, earning a reputation for its sweet flavor and energizing high. Today, this strain is sought after by marijuana growers and users around the globe.

Golden Goat is a Sativa-dominant hybrid of Island Sweet Skunk and Hawaiian Romulan. This strain presents the best qualities of both parent cultivars, offering the sweet fragrance and uplifting high of Island Sweet Skunk and the spicy flavor and euphoric effects of Hawaiian Romulan. As a result, the Golden Goat cannabis strain is extremely appealing to Sativa connoisseurs.

A legend of the Midwest, Golden Goat offers uplifting cerebral effects that inspire positivity and creativity. The strain’s energizing effects slowly fade into full-body relaxation within minutes of the initial onset. After consuming this strain, many users report feeling invigorated and happy, yet calm and comfy. These balanced effects make Golden Goat a go-to cultivar for easing stress and elevating the mood.

Golden Goat has a sweet, tropical-fruit aroma accented by spicy notes of cedar and soil. The flavor of this strain is also fruity and spicy with undertones of lemon and pine. On the inhale, this delectable cultivar offers a unique combination of sweet and sour flavors followed by an earthy finish on the exhale.

Golden Goat is a relatively easy strain to cultivate. Growers can expect this cultivar to complete the flowering cycle within 9 to 11 weeks, as long as they provide a stable environment. This Sativa-dominant hybrid has a significant stretch during the flowering stage and produces a large yield soon thereafter.

Golden Goat offers the best results when grown indoors in soil. However, this strain is also suitable for growing outdoors or in greenhouses. Growers will need to provide the plant with plenty of space and airflow in order to produce large yields during flowering.

The Golden Goat cannabis strain is a true Midwestern treasure. This elite, Sativa-dominant cultivar is perfect for elevating the mood and increasing focus. Its sweet, fruity aroma, copious yield, and vigorous growth make this strain a legendary addition to any garden.

Greenpoint Seeds offers seeds of Golden Nugget—a robust hybrid of the fruity Golden Goat and the funky Stardawg. Check out our Golden Nugget seeds, and browse our full selection of regular and feminized marijuana seeds. 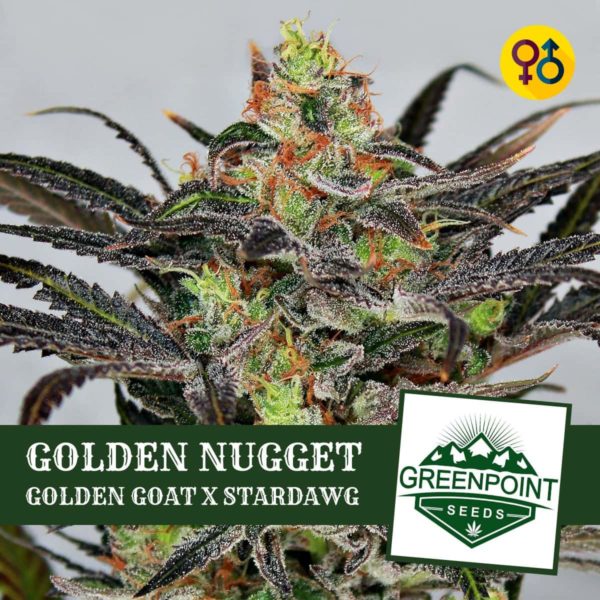